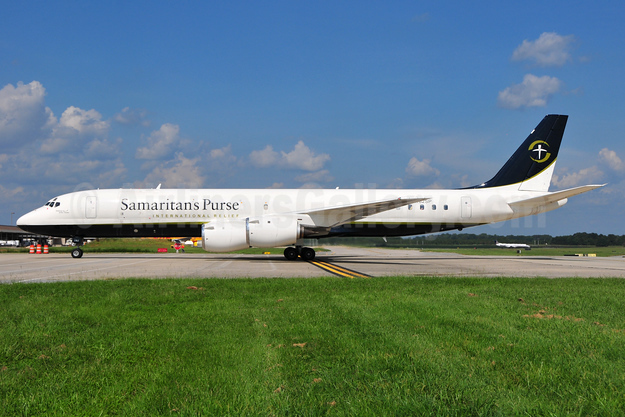 This venerable DC-8 airframe was originally delivered to Finnair as OH-LFR and named “Paavo” on January 27, 1969.

The airliner has also proudly served with the French Air Force (F-RAFG) and Air Transport International (N721CX) in its airline and military career.

Today is still flies on carrying humanitarian supplies to all parts of the world as N782SP.

Samaritan’s Purse is an evangelical Christian humanitarian organization that provides aid to people in physical need as a key part of Christian missionary work. The organization’s president is Franklin Graham, son of Christian evangelist Billy Graham.

The name of the organization is based on the New Testament Parable of the Good Samaritan, in which Jesus uses a parable to teach people one form of the Golden Rule; “love your neighbor as yourself”.

Samaritan’s Purse works in more than 100 countries around the world. It has been a key financier for Carllen Japheth Africa Relief which has operations in Kenya and Southern Sudan.[citation needed] The humanitarian work of the Carllen Japheth Africa Relief in North Eastern, Elgeyo Marakwet, Narok, Busia, Meru, Kajiado and Baringo counties has seen tremendous improvement in the livelihood of vulnerable ophans and widows.[citation needed] The international headquarters of Samaritan’s Purse are in Boone, North Carolina, with additional U.S. facilities in Charlotte and North Wilkesboro, N.C. Affiliate offices are in Australia, Canada, Germany, Ireland, Hong Kong, Netherlands, and the United Kingdom. Field offices are located in some 20 countries across five continents.